A Day at the Playground

I take the kids outside nearly every day for at least two hours. It makes a world of difference in their mood, and mine, for that matter.


Ivy's hard at work putting the straw in the juice box. 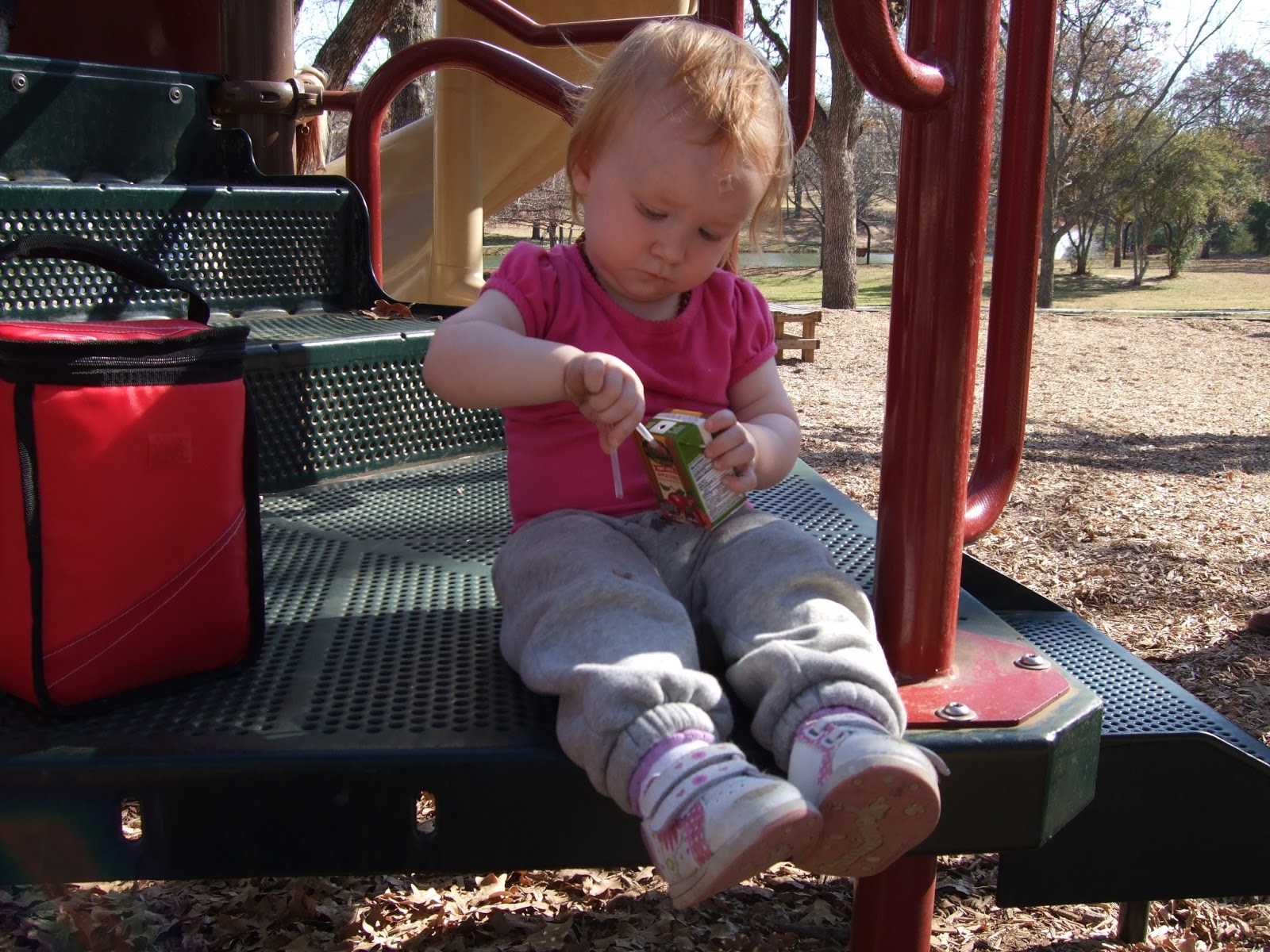 Brendan and his beautiful Mom. 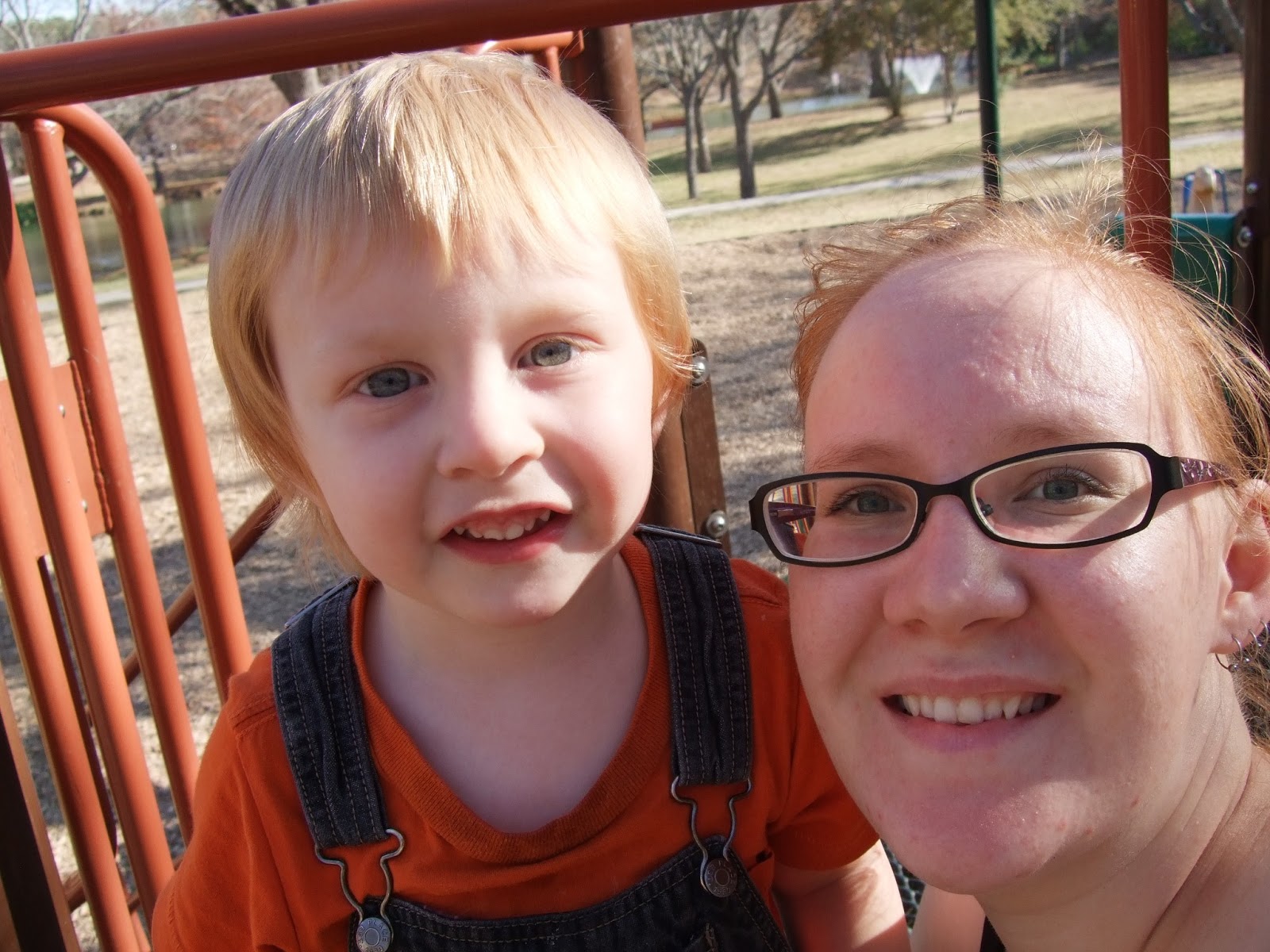 I'm wearing no makeup in this except mascara. Still gorgeous. :) 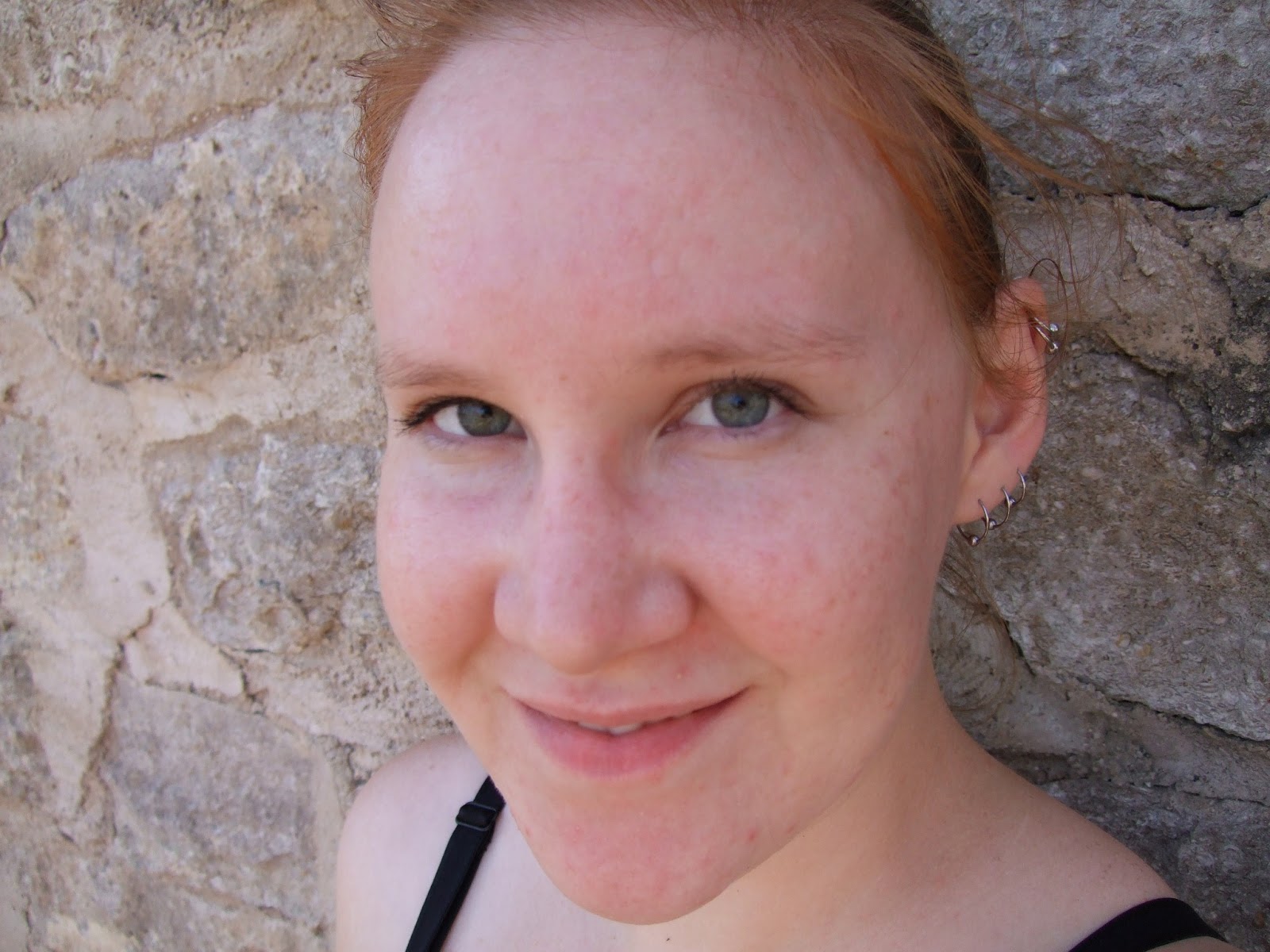 Posted by Unknown at 9:22 PM No comments:

As I'm writing this, my son is terrorizing his little sister with a remote controlled car, so let me take care of that...Okay, where was I?

Today, Brendan helped me make lunch. This is something considering he's only 2.5 years old. He cut olives with a butter knife, making sure to help himself and his sister to some whole ones along the way. He laid out fish fillets on a baking sheet. He tried to help himself to one of these as well and learned they are not so tasty frozen. He dropped teabags into the pitcher, stirred in the sugar, and put on the lid. He even helped me pray by repeating me line by line. I can't decide whether to encourage that or not, since I do want him to pray at home, but I don't want him matching the preacher line for line at church. And he likes to say "Amen!" Really loudly. Overall, I was very pleased with his cooperation.

Ivy (1.5 yrs) helped me start up a batch of bone broth by taking the veggie scraps and turkey carcass I had saved in the freezer and tossing it in the pot, along with some garlic and sea salt. It's simmering away on the stove now, where it will stay till this time tomorrow. I told my mom that when we move out, I'm taking the stock pot with me. It had been languishing on top of the cabinets with all the other for-decoration-only cookware, and when I first set my eyes on it, I was in love. Ivy could fit in it, it's so huge. I fantasize about all the uses I will have for it in my very own kitchen. Ah, yes...ahem.

I worry about Grandpa, my dad's dad. He has been losing weight even though his appetite is back. The home health nurse said that an odd side effect of Alzheimers is malabsorption of nutrients, meaning he could eat heartily and still lose weight. On bad days like today, he falls down, needs specific instructions to perform simple tasks, has to rest halfway from the bedroom to the dining table, and can't even make it through the whole meal before he lays his head down for a nap. I feel rotten for hounding him to do things against his will, but sleeping all the time will only make him decline faster. Sometimes I wonder if that isn't better anyway. But for my dad's sake, I keep soldiering on, making Grandpa go through the motions.

Grandma is doing alright, though. I don't know if it's stubbornness or forgetfulness, but she insists on trying to carry a tray full of dishes and use her walker at the same time. Three guesses how that works out. She has such a DIY spirit that it's hard for her to not do something she was used to doing before her stroke last summer. Thank goodness it wasn't worse--she had to adopt a walker, her balance isn't as good as it used to be, and her left hand is a bit weak. Arthritis has been attacking her joints lately, but she suffers through it with a smile. God bless her.

David, my husband, started training for a new job yesterday. I'm cautiously optimistic. Optimistic because David can do anything he puts his mind to. Cautious because this opportunity came about accidently, and it's not something I envisioned for him, like, ever. He delivers pizzas for Pizza Hut and one of his co-workers, Reider, who has ADD, asked for help studying to get an insurance license. David realized that this stuff was totally in his league and when Reider offered to get him an interview, he said yes. Today was Day 2 of the three-week training period, and then David gets to take the Weatherford insurance market by storm. He's still putting in a few hours a week in a the Hut, but money will be very tight until he sells some insurance. Time to flex my budgeting muscles.

We implementing two new practices into our family life. One is 15 minutes of uninterrupted spouse time as soon as David gets home from work. I had to leave the kids in the crib screaming bloody murder, but they were safe and contained, and re-connecting like this is going to be very important for David and I. We are both introverts, so we can go days without really speaking unless we plan it into our schedule like this. The other practice is family Bible study, led by David. We are planning to start with Psalms and Proverbs, just a chapter a day. I'm looking forward to this for several reasons, the most obvious of which is that I don't spend enough time with God's word. David's role as spiritual leader of the family will be more overt. And we can have a practice time at home to train the children to sit quietly and listen. Right now I can't take them anywhere that requires sitting still and being quiet, and I'd love to be able to do that.

I am struggling with keeping up with my own housework, and unfortunately the blame lays directly at my feet.  Laundry has been an issue for an embarrassingly long time. But I discovered a mind trick a couple days ago that has helped me make inroads. I pretend like these are new clothes that I am washing and putting away for the first time. It seems silly, but this helps me look forward to doing the laundry because I can't enjoy wearing my "new" clothes until they are put away. And I appreciate the bounty of clothes that we have. We are so blessed.
Posted by Unknown at 10:07 PM No comments:

Check out this rockin' giveaway!

Several months ago, my young son was eating some cheese. He liked it so much that he poked cheese into every corner of his mouth--so much that he couldn't even chew it anymore. In a panic, he came to me and spat it out in my hand. Ew. I scraped the cheese off into my empty coffee cup and went back to nursing my newborn daughter.

Still feeling tired, I got myself another cup of coffee, and as I was nearing the bottom, I noticed some odd orange chunks swirling around in there. Oh. Crap. Yes, reader, I was so sleep deprived that I drank coffee with ABC (that's already-been-chewed, for you non-parents) cheese in it.

What are some of your funny, sleep-deprived parenting stories?
Posted by Unknown at 7:37 PM No comments: